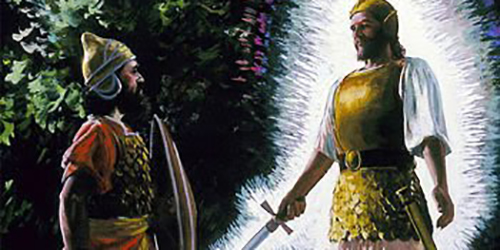 Joshua and Israel had just crossed the Jordan River by a tremendous work of God and were preparing to destroy the city of Jericho. God was surely on their side. But Joshua had a rude shock when he met a man wielding a sword. The story goes like this:

When Joshua was near the town of Jericho, he looked up and saw a man standing in front of him with sword in hand. Joshua went up to him and demanded, “Are you friend or foe?”

“Neither one,” he replied. “I am the commander of the Lord’s army.”

At this, Joshua fell with his face to the ground in reverence. “I am at your command,” Joshua said. “What do you want your servant to do?”

The commander of the Lord’s army replied, “Take off your sandals, for the place where you are standing is holy.” And Joshua did as he was told.

Was this strange person a friend or foe? The puzzling thing is he replied, “Neither one”. We know that this person was either an angel or the pre-incarnate Christ (before he was born as a human). So this person was sent from God. Wouldn’t that automatically make him a friend, an ally to Joshua? Apparently not.

God is a friend or foe depending on your response to him. Do you obey his commands? Do you abide in him? Do you have a restored relationship with God? This was a key moment for Joshua as he received instructions on how to conquer Jericho that were, to put it mildly, unusual (read: out of this world). Would he obey or reject God?

Joshua accepted God’s command and carried them out faithfully. God was his friend. If he didn’t, God would be his foe! God’s hand would be against him because of his disobedience. Remember, 40 years ago, 12 spies went to spy the land of Canaan and though God had promised to give them victory over their enemies, 10 spies didn’t believe. They rejected his commands and led Israel to lose faith in God also. Thus, God punished them by sending them into the wilderness. God is not an automatic friend nor a foe. It depends on how you respond to him.

Joshua recognised the holiness of God. He took off his sandals in reverence. It’s not about God being on your side. It’s about you being on God’s side. Is God your friend or a foe? Would you bow in reverence before God today and recognise his holiness and to obey him with all your heart?