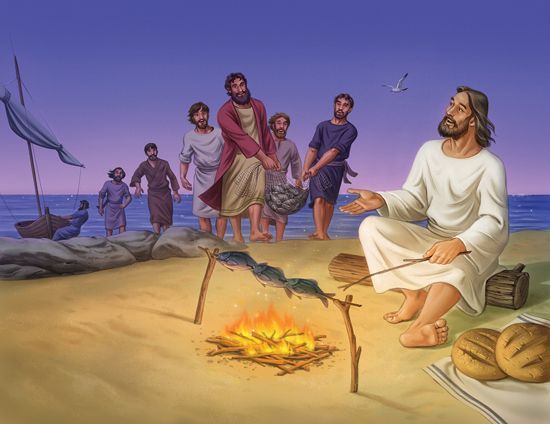 When they landed, they saw a fire of burning coals there with fish on it, and some bread. Jesus said to them, “Bring some of the fish you have just caught.”

The disciples were restless. Jesus had just died on the cross and reappeared alive in the flesh to them. Then he disappeared again like a magician. It was a visionless time for them. What were they to do now?

Peter went back to what he knew – fishing. He was supposed to be a Fisher of men not a fisherman. But in times of aimlessness, he went back to his old job. He went back into his comfort zone. So they laboured hard through the night but caught nothing. But in the early morning light, a stranger called out from the shore.

In the misty morning fog, they couldn’t recognise who it was at first. Just instructions to let down the net on the other side. We read:

He said, “Throw your net on the right side of the boat and you will find some.”When they did, they were unable to haul the net in because of the large number of fish.

John, the disciple whom Jesus loved, recognised the stranger as Jesus. How did he know? Because it was a miracle déjà vu. Just when Jesus first called Peter and a few others with a miraculous catch of fish (Luke 5), he reminded them again of that original call. Sometimes we lose sight of our original call. We get tired of ministry because it’s so difficult. So unrewarding. So thankless. It isn’t worth the effort or heartache. We go back to our own ways. Maybe even considering calling it quits.

But Jesus gently renews our call. He shows Peter that he can do nothing without him. Toiling all night yielded nothing. Your experience in the past doesn’t guarantee success in the present. Till he gave a simple instruction to cast the net on the other side of the boat. Jesus reminded Peter that he could not achieve anything without his help. Similarly, we cannot achieve anything without God’s help. No matter how hard we may work. No matter how experienced we are (Peter was an experienced fisherman). Do you believe that without Jesus you cannot do anything? I mean, literally, anything with Jesus? That’s a humbling thought.

There’s Peter’s miraculous catch. But we may miss Jesus’s miraculous catch too. When they reach the shore, Jesus had already started grilling his own fishes. Where on earth did he get them from? It teaches us an important lesson in ministry: Jesus doesn’t need your fish. Let that sink in for a moment. He can do the work just as well with or without you. But as co-partners, co-labourers in this wonderful redemptive ministry, Jesus gives us the privilege to join in (1 Cor 3:9).

Jesus tells Peter, “Bring some of the fish you caught.” Though He can work without us, he wants to work with us. That’s the ultimate rest knowing that we don’t need to produce results. But when we obey Jesus and his methods, there will be fruit. Fishes will be caught. Nets will refuse to break even under immense weight. Miracles will appear. When we co-labour with Jesus, we rest in the fact that Jesus doesn’t need our fish but he wants it.

One thought on “Jesus Doesn’t Need Your Fish!”