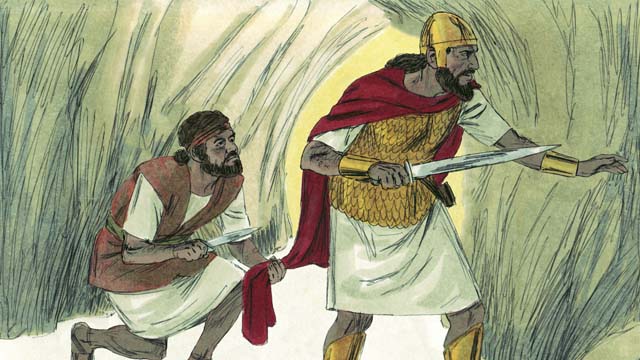 We’ve all been wronged before in our lives. It maybe a family member, a close friend, a pastor or a colleague. It hurts especially when we are innocent but falsely maligned. What do you do when you have been wronged by someone? Do you take revenge? Do you let it slide? Do you badmouth the person to others? Do you bury it within and become bitter? There are many options when we get hurt. It can be even worse if the other party doesn’t realise their wrongs. It is tempting indeed to take revenge into our own hands to even the score for all the harm we received. But there is a better way that we learn from the lives of David and Saul. David left revenge in the hands of God.

Saul wanted to kill David out of jealousy. God had rejected Saul for his disobedience and chosen David as the next king, a man after His own heart. That made Saul hopping mad! Consequently, David, who had done nothing wrong, was hunted down like a dog to be silenced.

There were two opportunities where David could have took revenge (1 Sam 24 and 26). David’s men urged him to seize this God-given opportunity to kill Saul and end this man hunt. But David refused. Even cutting a corner of Saul’s robe made him guilty-stricken. Sometimes the people around us can give us wrong advice on what to do. We need to listen to what God tells us. We take personal responsibility for all our decisions.

In the second incident  in 1 Sam 26, David explained to Abishai why he refused to kill Saul.

Abishai said to David, ‘Today God has given your enemy into your hands. Now let me pin him to the ground with one thrust of the spear; I won’t strike him twice.’

But David said to Abishai, ‘Don’t destroy him! Who can lay a hand on the Lord’s anointed and be guiltless? As surely as the Lord lives,’ he said, ‘the Lord himself will strike him, or his time will come and he will die, or he will go into battle and perish. But the Lord forbid that I should lay a hand on the Lord’s anointed. Now get the spear and water jug that are near his head, and let’s go.’

Saul, even though he was guilty of many sins, was still king. He was still the Lord’s anointed. David would not harm God’s anointed servant. He left Saul’s fate in the hands of God who is just and swift to act. He knew Saul would meet his end one day and God would be the determiner of it. Taking justice into our hands against someone who has hurt us is not the way. We must leave vengeance in the hands of God (Rom 12:19). God knows what is best. When humans take revenge, we often harm the other party unfairly with disproportionate force. Only a just God can handle it fairly.

When we may be hurt by some authority figure (pastor or leader), we need to remember that he/she is the Lord’s anointed person. Like David, we declare our innocence and not take revenge. If we do take revenge, we become guilty of sin. Thus, we must not badmouth, spread harmful rumours or use social media to flame someone in order to take revenge. Instead, we return good for evil by praying for justice to prevail and leaving the other party in the hands of God to deal with.