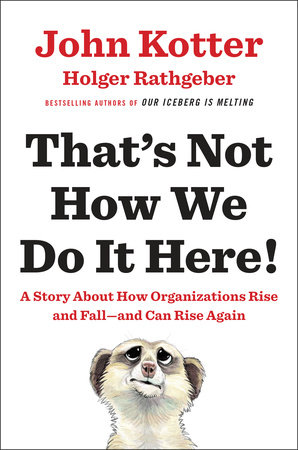 John Kotter’s 2016 book “That’s Not How We Do It Here!” is a story about how organisations rise and fall and how they can rise again. It’s about navigating change. Kotter encapsulates it in a story much like his previous bestseller “Our iceberg is melting“. Previously, it was about a group of penguins, this time it’s a clan of meerkats.

If you have no time to read the book, you can watch this summary video:

Kotter presents two meerkat clans that operate with different styles: Management or Leadership. However, you cannot have one without the other. Obviously, without both, you’re doomed. Check out this key chart from his book: Management was the in-thing for a long time till the 1990’s when leadership books entered. John Maxwell, the guru of leadership, almost single-handedly influenced everyone in organisations to become leaders. Whatever happened to managers? That’s unfortunate, because Kotter asserts that organisations need both leaders and managers. Often, pure leadership works well in small organisations that need to innovate and roll with the punches. And when these organisations grow to a certain size, they need to add in management to the mix. Policies and procedures are put into place which are good. But the danger is that innovation becomes disregarded. This makes organisations slow to adapt to changes all around – especially in our rapid times. Thus, the key is to have both Management and Leadership in order to grow further.

I think this story represents churches very accurately. Often small churches are able to try many new things and change direction quickly (leadership). Everyone knows everybody and one person can take on multiple roles. That’s what makes it so dynamic and exciting to be around. But when it grows to a certain size, management needs to come in. Everyone doesn’t know everybody – it’s too huge. Furthermore, it can’t be a one-man show any longer. Roles needs to be distinct and specialised.

Some churches fossilise. They are just machines running week after week with little innovation. It’s just about managing the status quo: Having enough musicians, getting ushers, maintaining church grounds. Being faithful to the traditions, rules and rituals are crucial. No creativity is expected since everything is working well (even though the rules or traditions were formed years ago in a different era). As some people say, if it’s novel, probably it’s heresy! It all goes smoothly, till it doesn’t.

People vote with their feet. People have left the traditional, management style churches. Usually, it’s the creative types that leave first. The trendsetters who are told not to rock the system. “That’s how we have done it for the past 50 years young man/lady!” Then the innovators leave. Others leave because church seems alien, disconnected from daily life. It’s as if they stepped into the twilight zone. The songs are from the 18th century, the preaching is dry as dust and the liturgy seems wooden (though some say it’s really meaningful). So they leave for more modern churches that innovate and connect with today’s culture. Sadly, some just leave church entirely.

The church today needs leadership and management than ever before. Both of them. We need innovative trendsetters who have a finger on the culture’s pulse and are ready to adapt. We need analytical workhorses who are able to run the church efficiently and create systems to support growth. You need to be both a manager and a leader for churches to grow.