As part of my personal skill upgrading, I decided to study and learn why some preachers are better able to capture my attention. How is it that some preachers speak for an hour but feels like a few minutes while others speak for a few minutes but feels like an hour? That’s what I would like to highlight key points. Once you’ve learnt the various methods, incorporate some of them and it becomes your style. I would not critique their biblical content but only on their styles of preaching. We know that good content when delivered poorly is just as ineffective.

Bishop Dale Bronner is a black preacher who is part of the Word of Faith family. Some of you might disagree with his theology but he is nonetheless an excellent presenter. After watching several of his sermons (here’s a good sample: Be still and know), here are some key points of his preaching style.

1. Repeat the title at the start.

At the start of the sermon, Bronner begins in the pulpit. He repeats the title slowly and clearly several times in a row so that the congregation knows it.

2. Be dynamic. Have two (or more) modes: Normal and Excited.

Bronner is a dynamic speaker. When he stands behind the pulpit, he speaks calmly and confidently. His posture is erect and often speaks with a gentle cadence. That’s his Normal mode. Sometimes, he steps out from the pulpit and walks around the platform. In his Excited mode, he speaks with more expression, actions and exhortations. Often, he expands the same point that he made at the pulpit in a personal way and returns to the pulpit to continue his sermon.

Halfway or near the 3/4 mark, he steps out of the pulpit for an extended period of time to exhort the congregation. This is a longer Excited mode. He gives applications and encourages his listeners to apply the truths he spoke on. He uses “you” many times (e.g. “God says to you…”). His voice raises in intensity over time and he begins to shout loudly. At the climax, background organ music begins to play while he keeps on yelling with intensity and passion. Many congregants clap and stand up in agreement. Some term this as the “whooping/celebration” mode especially used by black preachers to inject excitement into the sermon. (Since I’m Singaporean, can I do a Singlish/Hokkien mode? I got to try it one day)

After this climax, Bronner returns to the pulpit and reverts to his Normal mode. He speaks softly and ties up his sermon. It might be even softer than normal. If you analyse the time stamp for his mode switches, it paces nicely with a narrative arc in a storybook or movie. The arc looks like this: 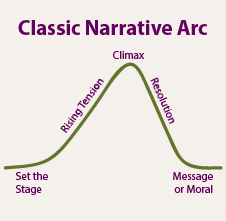 We see from this diagram that intensity rises and falls as the story progresses. This is good storytelling. Intensity might rise and fall like crests of waves in the beginning but it always increases till the climax. That’s why Bronner comes out from his pulpit for a short time in the earlier part of his sermon to build some excitement but only near the end does he build up to the climax. He then relieves the tension built up in the climax with a short and soft ending.

Bronner includes Bishop’s Notes which lists out questions for reflections, Greek words with explanations or key points. The congregation must understand what you’re talking about or they’ll tune out. He rarely uses it, which makes it more powerful. When preachers rely too much on powerpoint, their points lose power! Sermon outlines in church bulletins work well too but may distract them from looking at the speaker. Once the point is covered, blank the slides.

If there are other preachers whom you enjoy listening, please comment and I will take a look at them.